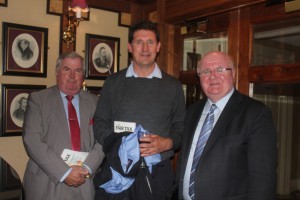 “The Fair Tax” was launched by Smart Taxes in Buswells hotel yesterday. Fr Sean Healy introduced the book with a call for general tax reform. He pointed out that Social Justice Ireland has always been a supporter of land value tax. A proposal for a land value tax to fund a citizens income has been floated in a recent European conference held on social justice issues, with which he heartily agrees. He commended the book using the words of economist Colm McCarthy in the preface.
“There is nothing to celebrate in the disaster which has befallen the country as a result of the credit-fueled property bubble, but the willingness to tear up the system of tax subsidies to the property sector is one small consolation. The restoration of any form of tax on residential property should be welcomed. Basing the tax on site-values, rather than on the capital values of the built capital stock, would be even better and this volume makes a persuasive case for a re-consideration of government intentions”.
Judy Osborne then gave a brief overview of her contribution to the book. Judy’s background is in conservation, planning and local government. The adoption of a site value tax would vastly improve the outcome for communities from all of these perspectives. Dr Constantin Gurdgiev followed and strongly emphasised the ‘value capture’ potential of a site value tax in the Irish context and its superiority over further taxing income. The effective tax rate for many middle income earners is over 50% taking levies into account, he said.  Any further increase would have a disincentiving effects on education. A well well designed site value tax could reduce that burden to help retain educated young productive people. I (Emer Ó Siochrú) then finished by reminding the audience of the long land struggle in Ireland and that a site value tax can be seen in that historical framework –  of reclaiming ‘the land for the people’.

Over 17 TDs were present as well as advisors and a number of Seanad members. They came from a range of political perspective, from Fianna Fail to Sinn Fein to Green Party. We were gratified to see Pearse Doherty, Sinn Fein economic spokesperson who was still suffering jet lag from his flight from Australia. All feedback was very positive and while they could not immediately promise to  support a site value tax,  all left demanding to see the Property Expert Group Report and data on zoned land held by the Department of the Environment in order to inform themselves better on the subject.

The media were not interested however, no recognizable journalists were spotted at the party. We hope they will come to the debate in Trinity next Monday the 24th September to report on the growing demand for a proper discussion of the form of the new property tax for Ireland.

Thanks to Fr Sean Healy Judy and Constantin and all who helped make the event so enjoyable.