The tax regime in Ireland has been very favourable to property owners, but especially to developers who, with their banks, took maximum advantage. It fuelled the disastrous development-site debts of a handful of testosterone-charged developers and led directly to the Irish state’s guarantee of the collapsing banks.

Instead of targeting irresponsible developers, speculators and banks, the government is planning to bail them out again by excluding their land hoards and undeveloped sites from the new property tax. Ordinary home owners will pay at least 20% extra tax every year so that they can continue to pay nothing. Only a Site Value Tax can make them continue to pay their fair share. 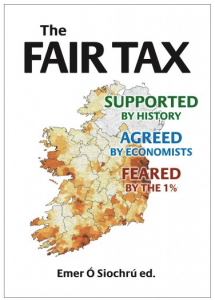 This book explains how a second massive transfer of wealth from the 99% to the 1% can happen again due to the ignorance of politicians, the hubris of the Department of Finance, and the continuing backroom influence of the developers and bankers. The authors clearly explain the real advantages of a Site Value Tax over a conventional property tax and convincingly show how easy is it to assess and implement.

Leaked reports suggest the government believes that the Irish people would not understand a Site Value Tax but would understand, and presumably accept, a flawed property tax. Do the Irish people deserve this assessment of their intelligence by their leaders and, as a result, their continuing punishment?

Read this book and make up your own mind.

Available at all good bookshops nationwide.