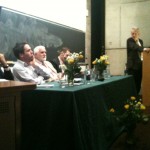 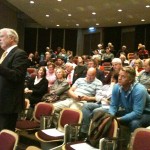 Smart Taxes hosted a very lively and well attended event in Trinity College on Monday evening 24th September. Three ex city Mayors, one a “ex Lord Mayor” announced their presence. As expected and desired, the panel of were challenged with many hard and interesting questions. John Bowman showed his experience and skill in keeping the discussion on topic and well tempered.   Politicians from all parties (by especially the Labour Party it has to be noted) showed admirable interest in debating the property tax in Ireland as for the launch of the “Fair Tax” book but very few media columnists attended.

This shows a real desire to tease out the design of a new property tax by the people and their representatives in the face of increasing intransigence on the part of the government to have their plans examined ahead of the budget.

The silence of the media in respect to the design of the new property tax is puzzling but strangely familiar.  It recalls their lack of critical comment during  the property boom, due, some claim, to their dependance on property advertising.  Could the influence of property developers, speculators and bankers still be resonating… Watch this space.

Smart Taxes also hosted a session in the Dáil Audio Visual room for any elected representatives to attend.  The panel included Dr Constanitn Gurdgiev, Judy Osborne, Charles Stanley Smith (ex president of An Taisce), and yours truly Emer Ó Siochrú.   A respectable bunch of politicians took the trouble to participate in a debate from all Parties and ideological leanings.

Independent Richard Boyd Barrett came to listen, to his credit – but unfortunately, was  not to be convinced.  His worry was  that “a homeowner in an ex-council house would pay but a tenant in a council house would pay nothing”.  His focus is entirely on income tax – and tax rates for the wealthy.  He is apparently perfectly happy to allow the accumulation of unearned wealth so that significant redistribution would always be necessary.  But maybe we expect too much – he may yet see why SVT is more radical than a wealth tax when he has had some space and time to think.  It was very clear that it was the first time such an alternative progressive fiscal mechanism was ever suggested to him. Mick Wallace was very quiet in contrast at the back of room – understandable perhaps, given his history as a boom and bust developer.

Ex FF Minister Eamonn O’Cuiv worried about his constituents whose land was zoned without their permission and desire and who would have to pay the tax.  He didn’t appear to hear the answer that they could easily forgo their development rights if there was alternative land as good.  He also claimed with other FF Councillors to have saved parts of Galway from over development by single remote houses – from the town planners.  That fact was hard to credit given his forthright of defense of the “right to sites for farmers” and his demonisation of an Taisce for appealing many such planning permissions to an Bord Pleanala over the years.  Charles Stanley Smith was fit to be tied.  His departing shot that he would never support a  “tax on the principle residence”.

That sentiment was shared by many Fianna Fail TDs and their advisors present.  The best answer to that position can be found in the Australian Henry Report on Tax Reform.  He argued persuasively that exempting home owners shifted the burden onto the poorest of society – those who rent.  This can hardly be what FF wants? or maybe it is….given their record in power.

Many of the audience were very positive. Labour Party Senator, John Gilroy immediately understood the logic of site value taxation and was particularly supportive.  All attendees were grateful for the chance to hear the arguments and discuss the most important change to Irish taxation systems for over twenty years.  No such opportunity was offered in the main chambers of the Dáil. The current Coalition of Fine Gael and Labour is committing the exact same mistake as the last Coalition of Fianna Fáil and the Green Party which is to retreat into crisis conclave and close off all channels of communication, even with their own party members.

In that regard, Smart Taxes wishes to thank Fine Gael TD Peter Mathews again, for his good offices in arranging  the AD room event. He is a true public representative in that he believes in preserving space in the political arena for those who question the orthodoxies – even when they run counter to his own party’s policies.