Very good blog by Ronan Lyons whom Smart Taxes commissioned to scope how SVT might be implemented in Ireland in the near future.  Worth going to his blog to see the comments.

“The Minister should say: ‘We can either introduce this property tax, or else we will need to raise the lower rate of income tax from 20% to 25%. Both harm disposable incomes but only one harms the creation of jobs. Which one do you want?’”

Recently, reading the Irish Independent has been a bit of a rollercoaster for me – one day I’m practically doing the government’s job for it for free, the next I’m guilty of elder abuse. By way of context, in late January, I presented at the Dublin Economics Workshop Conference on Irish Economic Policy. Specifically, I presented on how a Site Value Tax might be introduced in this country, both on an interim basis and on a full-time basis – a podcast of the entire property market session is over on the irisheconomy.ie website.

My proposal – full report here – was relatively straightforward: use the best information we have currently (1.3 million sales and lettings ads posted on daft.ie between 2006 and 2011), and the best methods available for establishing the components of house prices (hedonic price regressions) to implement the best known form of taxation (Site Value Tax) on an interim basis, in an area where Ireland desperately needs new revenues: residential property. And when better information becomes available – in particular the Revenue Commissioners register of transactions – then that can be used for a full Site Value Tax. My map outlining relative land values in 4,500 districts across the country is reproduced below. 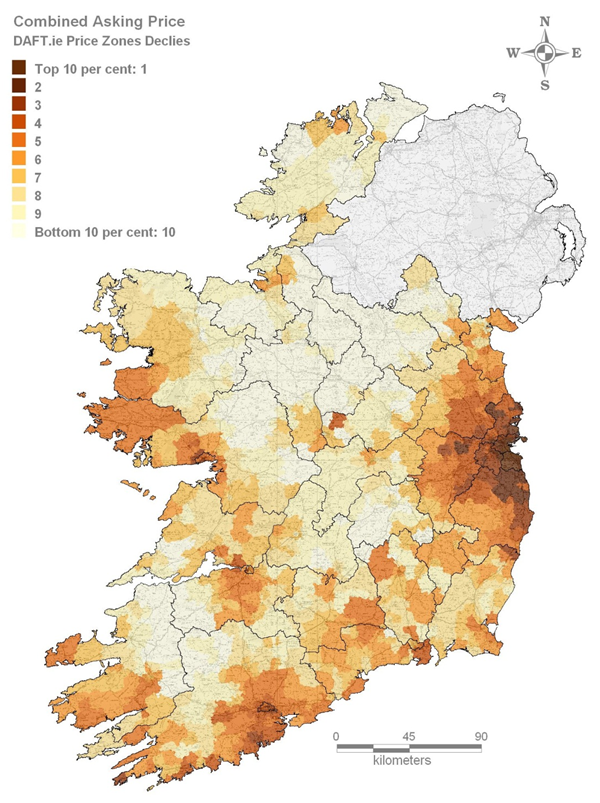 4,500 districts of Ireland put into one of ten land value bands, for the purposes of an interim SVT

Why do I say SVT is the best known form of taxation? Ultimately, because it’s fair and efficient. It’s that rarest of taxes, popular with not only both left- and right-wings but also with environmentalists. Left-wingers like Site Value Tax because ultimately real estate is the single biggest form of wealth – and what left-winger worth their salt doesn’t like a wealth tax? Right-wingers like Site Value Tax because it does not distort economic outcomes: land can’t go anywhere, unlike pretty much every other input you can think of, so just because it’s taxed doesn’t mean that rents have to go up or that business has to move elsewhere. And environmentalists like Site Value Tax because it encourages the best use of land, which is a scarce resource. Why would you keep a site derelict if you’re getting taxed as much as the same the guy next door making that land work?

A Site Value Tax is particularly appealing when viewed in the context of local government. Think back to why any land you own is worth more than agricultural land. It’s because of a range of amenities to which your land offers access – from public services like education, health and public safety, through environmental amenities like urban green space, coastline or lakes, to more intangible services, such as access to thick labour or consumer markets. Unlike, say, the value associated with shares in a firm, no one person or group of people creates the value associated with land – society does and thus SVT is the return that society gets for creating the amenities we enjoy.

A Site Value Tax fundamentalist would say that none of this matters. Those who bought during the boom are not going to un-buy because this tax is brought in and besides the SVT reflects current land values, not bubble-era values. They would argue that those who are land-rich but cash-poor should be encouraged to move on, as a country where every set of parents who refuse to downsize on retirement push their own children’s homes further out. And a country of large rural sites imposes greater costs on urban dwellers subsidising their scattered neighbours – thus a site value tax should – and would – reflect this, they would argue.

A Site Value Tax realist knows that these things matter. Hence I prepared a series of FAQs in the full report prepared for Smart Taxes and the Department of the Environment, available here. Bubble-era buyers, for example, could be given a graduated tax credit from introduction of SVT for a five-year period (similar to mortgage interest relief). After this, 2004-2008 buyers would be liable for the same amount of tax as their neighbours on similar plots.

Those with large plots of land but little income – in particular pensioners – could easily be accommodated with the use of lien on the property, where the tax bill is postponed until the property is ultimately sold. And rural dwellers will almost certainly pay less than their urban counterparts anyway, with such a large differential between urban land values and residential ones. Allowing rural landowners to decide once and for all which of their land is residential and which agricultural would also assuage fears that rural life would be irrevocably destroyed.

In truth, any lobby group can be accommodated – we just need to be clear that this is what we’re doing. We’re shifting the burden from one group on to the rest of society. We may have good reasons for doing this but we shouldn’t fall for emotive arguments that try and disguise that.

One lobby group I think we should pander to is people, as opposed to empty land. What do I mean by this? Suppose we have two adjacent 1-acre city centre site. One owner leaves theirs empty (Case A) while the other builds 100 apartments, each worth €200,000, and rents them out (Case B). In case A, the site is worth €5m and in case B the block is worth €20m, of which the site is worth €5m.

Under a full property value tax, the empty site has a liability of €25,000 while the apartment block pays €100,000. It seems very unfair, though, that the site being used productively, from society’s point of view, has to pay the burden of the tax. Under a 1% SVT, both sites would pay a tax of €50,000 – already the person leaving their site empty is being encouraged to use their site to generate a return.

How much could SVT raise? The tax I proposed worked off an assumption that the Goverment would like to emulate best practice in this area and generate about €2bn in residential property tax annually – this is where the €625 per household figure from the press came from. If applied to commercial property also, a full SVT which replaced commercial rates, stamp duties and the 80% windfall tax, would constitute about €1bn in new revenue streams.

The natural response of anyone to the suggestion of a new taxation averaging €625 a year is “No thanks” (or possibly worse). To argue this, though, is effectively an argument for higher income tax and higher VAT. This is because everyone agrees that Ireland needs to raise about €4.5bn in new tax revenues over the coming years (€4.65bn by 2015, according to the 2011 Medium-Term Fiscal Statement) and even if organic growth delivers, as the Department of Finance expects, €1.4bn, that’s €3.25bn needed through fresh taxation measures.

Ultimately, there are only three types of taxes: those on incomes (which hurt competitiveness), those on consumption (which are bad for equity) and those on wealth, including property. So those who argue out of hand against a property tax such as SVT are arguing for the €3.3bn in new revenue streams to come entirely from some combination of income taxes or consumption taxes, both of which hurt jobs. And with Ireland’s VAT rate the highest in the world outside the Nordic countries and Ireland’s income tax rates among the highest in the world, the scope in these areas is limited.

For me, the key point is that when a full property tax is proposed, it needs to be done as part of an array of alternatives. The Minister cannot simply say, in the context of needing to raise €2bn: “Here’s our idea for a property tax. Do you like it?” No matter how nice the tax is on paper, the answer is going to be overwhelmingly “NO!”. Any property tax needs to be proposed as one of two (or three) options: “We can either introduce this property tax, or else we will need to raise the lower rate of income tax from 20% to 25%. Both harm disposable incomes but only one harms the creation of jobs. Which one do you want?”

Note that the €625 average figure above was an input of the research (we need this to raise €2bn), not an outcome. The tax could be introduced at any level. At €100 a household, it could merely replace the household charge – but that’s not going to fund too many local amenities.

Alternatively, and much more boldly, the introduction of a 10% SVT on residential and commercial property – which would raise perhaps close to €10bn – could be done in conjunction with a reduction in VAT and a reduction in income taxes. This would help close the deficit, boost Ireland’s competitiveness, improve the fairness of the tax system and encourage efficient use of land. What’s not to like?