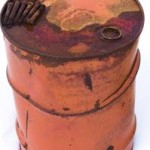 Managing a retreat is the most difficult of all political tasks. It is always easier to offer something new rather than to try to take back an existing benefit. But when it comes to our use of fossil fuels, which have provided huge benefits to our society, it is now time for an organised retreat.

We need to retreat because the emissions from burning coal and gas threaten the climate system upon which our lives depend. We also need to do so because we face a peak in global oil production and we have to start changing our food and transport systems to cope with the decline in oil supplies that will follow.

I remember Colin Campbell setting out the need for such a retreat at a Feasta conference in Autumn 2002. Like several of the members of the Association for the Study of Peak Oil, he spoke with expertise as a former oil exploration geologist but also with a certain independence as he no longer had any vested interest in the oil business.

Rather than relying on the claims from governments and oil companies about their reserves, he was one of the first people to conduct an oil-field by oil- field analysis to try and determine the actual flows of oil we could expect. His analysis estimated a global peak in production in the early part of this decade. Despite a trebling of oil prices in the interim period, global oil production has shown no real growth. New wells, tar sands and gas to liquid production are only managing to replace declines in existing fields. The peak in global oil discoveries occurred in 1963 and, with fewer big fields being discovered each year, the task of covering production declines has become increasingly difficult.

The retreat from over-reliance on oil needs to start two decades in advance of a future decline in production, as this is the half-life of much of our machinery which depends on relatively cheap oil supplies. The power infrastructure we build today will be in place for a lifetime. The cars we buy today will be still on the road in ten years’ time and our air and shipping fleets would take decades to modernise even if we had easy alternatives to these oil-dependent transport systems.

The retreat will have to be organised on a global scale by all the major oil- consuming countries, if we are not to see huge transfers of wealth and political power to the producing countries. Estimates vary about the speed of decline that we can expect but even the more optimistic figures would require us to reduce our demand for conventional oil products by three or four per cent annually to keep below supply limits.

Some will argue that new natural gas supplies will allow us get off this hook. It is true that new shale gas supplies have altered the international gas markets. However, as Dennis Meadows and others showed in the 1972 book The Limits To Growth, the challenge this century will be to avoid breaching one of a number of constraints that come with living on a finite planet. Even if gas is more easily available and even if it has relatively low carbon emissions in comparison to some other fossil fuels, the reality is that simply replacing oil with natural gas will still see us breach the greenhouse gas limits that the best scientific advice says we have to avoid.

After the failure to achieve a global climate agreement in Copenhagen, it is up to individual countries to start showing some leadership and start cutting out the carbon. In Ireland we have the motivation to make that change as we are one of the most imported oil dependent countries in the world. However, we also have the good fortune of being rich in natural resources in wind power, ocean energy and in having a good climate for growing crops which can provide alternative energy supplies. We are also in the right time and place to consider new financial instruments to help make such a switch as we pick up the pieces from our banking crisis.

We have shown that we can change. We are one of the few countries in the world that has put a price on carbon across the economy. At times earlier this year, new renewable wind power supplies were providing some 50% of our electricity. We will be one of the first countries to have a national network of electric vehicle charging points. We are developing real expertise in using new information communication technologies to improve energy efficiency. We are changing our energy utility model to favour the delivery of energy savings in our buildings rather than just selling power supply. However, we are only at the start of the process and it will take consistent effort from our public, political and business system if we are to make the necessary changes.

At a public event recently Richard Douthwaite was asked whether he was optimistic or pessimistic about the state of the world in 2050. He replied that he was neither, but would rather adopt the philosophy of a wise man he had met once in India who said that the Bhagavad Gita taught that we should be neither optimistic nor pessimistic but just do the work which God had put before us.

Feasta has been working for the last ten years raising the alarm, looking for fundamental reforms in our money systems and promoting new ideas as to how we can generate and use energy differently. It has been helping to advance the retreat.