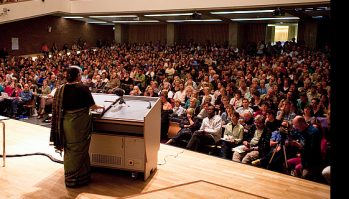 This was the theme of a massive congress held in Berlin last month. Brian Davey attended it and has written a report for Feasta in which he describes the role played by Attac and the Decroissance movement, Vandana Shiva's critique of economic growth in India, the vision of "Buen Vivir" put forward by representatives of indigenous communities of Latin America and the new relationship being forged between the greens and the left in Europe.
Support Feasta