By the excellent Namawinelake blogsite. Who says the West is Dead? 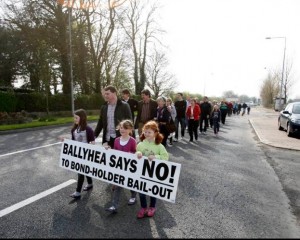 Since March this year, there has been a weekly protest march in the village of Ballyhea in Cork, just south of Charleville along the N20 going to Mallow. It’s a non-political 10-minute march each Sunday before the 11 o’clock Mass through a stretch of the village. Here’s a picture of a typical Sunday morning’s march:

And since March 2011, the villagers have also held a special march in Thurles, and then in June 2011, there was an extraordinary week-long journey on foot or bicycle from Ballyhea to Leinster House to hand in a petition. In recent weeks, its march has been replicated in Charleville. This community is not going “gentle into that good night”. And this week, the community in the person of local resident, Diarmuid O’Flynn, has launched a Facebook page to keep track of when we repay bondholders and how much. It also encourages discussion on what these repayments might alternatively be used for. There are plans to email the IMF whenever a bond is repaid, and ask why the IMF is standing idly by and abandoning its principles of burden-sharing and making a special case of forcingIreland to repay debt that many say is unsustainable. The IMF has only just managed to shrug off an image of savage interventions in developing countries where adjustments have been accompanied by wide-spread societal damage. The IMF will be reminded of the week-in, week-out damage being wrought on this country by its inaction. And the European Commissioner for Economic and Monetary Affairs, Olli Rehn, will be routinely asked why he supports a programme which drives Ireland further and further away from the 60% debt:GDP cap enshrined in the Stability and Growth Pact and which our Finnish friend was supposed to police alongside the 3% deficit:GDP cap. Indeed the ECB itself will be a recipient of regular communication so that it too understands the disproportionate damage being wrought on this nation, by its adopted position on protecting bondholders. And of course the Facebook page may become a stick to poke our own politicians. (link to full article)