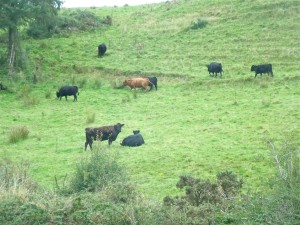 The US has what we do not have – proper land registry and up-to-date rental and sales values for land.  Farmland prices are keenly watched in each State.  Here we include excerpts from an Iowa State University report which publishes concerns over farmland sales prices and gives a useful overview of the factors that feed into prices.  Big Picture Agriculture site gives data for US farmland rents related to crops that show rents are very close to Irish rents for tillage land.

The difference then is the multiple or price earnings ratio or years purchase  of rental value to capital value.  At an average value of 10,000 per acre which is half that of bubble times, Irish farmland prices are still easily twice that of the USA.  Higher food prices across the board from grain to milk  prices might have led one to expect recovery in farmland prices in Ireland as seen in the US.   Land hunger being what it is in Ireland, we suspect that tight  bank lending policy is all that is holding back farmers at the moment.  As the Iowa study records..

…The supply and demand aspect of the land market can be characterized as few sellers and many willing buyers. A fundamental reason for this change in supply and demand is the lack of alternative investments. An analysis comparing the returns to Iowa farmland and the Standard and Poors index shows that farmland continues to be a more attractive investment. People who own land are not interested in selling and people who don’t own land are trying to buy for basically the same reason. Where else are you going to put your money?

The demand for land is also being fueled by the very low interest rates.

Not the case in Ireland any more.

The Iowa State survey does not directly address the question of a speculative bubble in the land market. But, it does offer some insights and possible answers to the question. As noted, the gross income to land has increased substantially over the past few years. Analysis has shown land values are more correlated with gross income than net farm income.

Farmers are the primary purchasers of farm land. The survey reports 70 percent of the sales were to existing farmers. Existing farmers purchase land for different reasons than someone who views the land strictly as an investment. Farmers buy land to own it. The land becomes a part of their retirement plan and their legacy. As such, whether or not the values increase or decrease will not prompt the farmer to sell. The most important factor is the level of debt they have against the land. If income falls and the farmer can no longer service their debt they may be forced to sell.

Currently we are not seeing a substantial increase in the amount of debt being used to finance land purchases. The USDA forecasts national farm real estate debt will increase 3 percent in 2010 relative to 2009. Since 2006 the USDA estimates show a 10 percent increase in real estate debt. Real estate debt as a portion of total debt or in relation to the value of total assets has remained essentially unchanged since 2006.

It would be very interesting to know what debt Irish farmers carry. We have anecdotal evidence that some farmers speculated on property using their farms as security.

For many years the U.S. farm programs provided support for farm income. However, the U.S. energy policies are now having a significant impact on farm income. Space doesn’t permit a detailed discussion of all the ramifications of the energy policies but suffice it to say that the policies have substantially increased the prices for both corn and soybeans. The policies have also put us in the unusual situation where what happens to the price of oil can have a significant impact on the price of corn.

Land values should remain strong for the next several months at least. Beyond that there is a fair degree of uncertainty with respect to whether or not land values can maintain their current levels. There are several key components to watch. One is the amount of debt incurred with land acquisition. A second area to watch is government policies, especially policies related to energy. A third area is what happens to input costs. Land is the residual claimant to any excess profits in agriculture. As such, if there is money to be made after increases in other costs, land values will increase. The performance of the overall economy, especially with respect to income will be an important factor. Government monetary policies as they relate to inflation and interest rates will also be important factors to watch. The performance of the US economy and economies throughout the world will impact commodity prices which impact land values. Finally, weather related problems both here and in the world will have an influence on land values.

The 2010 survey shows a substantial increase in land values. But, the rate of increase is half the yearly increases in 1973, 1974 and 1975. Land values increased over 30 percent a year during those years. We need to watch the land values and be prudent but I do not think we need to be overly pessimistic there will be a crash in values. In 2009 land values dropped slightly. This shows there is still discipline in the market. There may be a speculative bubble that impacts land as an investment but for now land still remains a good investment. Weather is a random factor but the fundamental supply and demand factors for land appear strong for at least the short run.

Taken together, we still believe that Irish farmland prices are too high at the moment, but may not look that way in the future as other investments classes collapse and the price of food continues to rise.