Feasta has been predicting the economic effect of declining oil supplies for some years, most recently in reports by David Korowizc.  The Economist still has not accounted for the integrated system disruption effects.  David will be speaking at the joint Smart Taxes & Tasc  ‘Learning from the Crisis’ conference  on May 9th.

THE IMF is rolling out its World Economic Outlook today, and it has already made public two analytical chapters of the report. One is on  trends in the market for oil and the potential impact of rising prices on global output. Here’s the summary text:

The persistent increase in oil prices over the past decade suggests that global oil markets have entered a period of increased scarcity. Given the expected rapid growth in oil demand in emerging market economies and a downshift in the trend growth of oil supply, a return to abundance is unlikely in the near term. This chapter suggests that gradual and moderate increases in oil scarcity may not present a major constraint on global growth in the medium to long term, although the wealth transfer from oil importers to exporters would increase capital flows and widen current account imbalances. Adverse effects could be much larger, depending on the extent and evolution of oil scarcity and the ability of the world economy to cope with increased scarcity. Sudden surges in oil prices could trigger large global output losses, redistribution, and sectoral shifts. There are two broad areas for policy action. First, given the potential for unexpected increases in the scarcity of oil and other resources, policymakers should review whether the current policy frameworks facilitate adjustment to unexpected changes in oil scarcity. Second, consideration should be given to policies aimed at lowering the risk of oil scarcity. 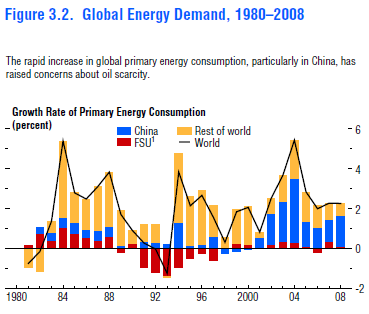 At right, you can see the recent path of the growth rate of oil demand. As a brief aside, it’s interesting to me to see the big drop in energy demand from the states of the former Soviet Union in the 1990s; one suspects that was a meaningful contributor to the big drop in oil prices in the 1990s.

Since the 1990s, demand growth in much of the world has actually trailed off a little, not least because prices have risen. But the steady rise of Chinese demand has contributed to the stress on supplies. 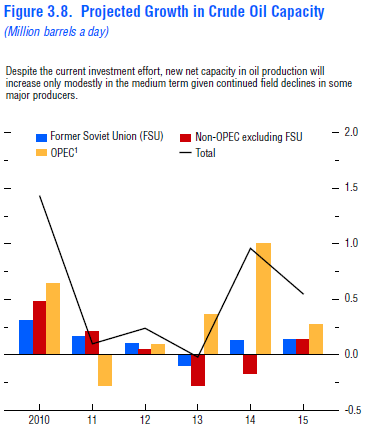 What about supplies, then? Well, as you can see at right, supply growth is projected to be quite lacklustre and consistently below growth in demand. As prices rise, exploration and new field development will pick up, but new drilling will have its work cut out for it simply making up for falling production from existing fields.

That’s a serious risk to consider. The dynamics in this market are pretty straightforward: oil is mostly used for transportation, and the key to limiting the impact of increased scarcity is improving the extent to which consumers can substitute away from oil use.

We know what that’s likely to entail—greater efficiency, greater reliance on electric transport, greater use (potentially) of biofuels and other petrol alternatives, reduced driving and greater use of transit and other travel alternatives. Some of these shifts can be better facilitated with the aid of public investment. There’s no question that substitution would be accelerated by a steady increase in tax rates on oil and petrol. Conveniently, those revenues could be used to fund necessary investments in alternatives.