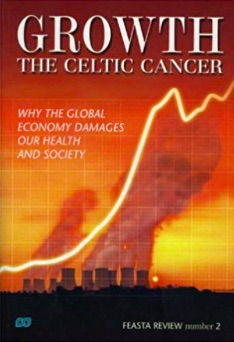 Growth: The Celtic Cancer, Why the global economy damages our health and society

A new issue of the Feasta Review was published in November 2004. “The aim of the Review is to present in a permanent form some of the thinking that has been going on in the Feasta network since the previous one appeared” says John Jopling, who edited it with Richard Douthwaite. “It is three years since the last issue and there’s a lot to report.”

The issue’s theme is the elimination of the human cost of economic growth and globalisation. In the opening article, Dr. Elizabeth Cullen demonstrates comprehensively how great this cost has been. She cites survey after survey to show how the stresses generated by Ireland’s recent, rapid economic growth damaged its people’s health and the strength of their communities.

“Although studies around the world had clearly shown that ill-health and certain crimes increase if the gap between rich and poor is allowed to widen, the Irish government deliberately increased the width of the gap by its tax policies in order to improve competitiveness” Dr. Cullen says. “In other words, they sacrificed the health of the people to improve the health of the economy. I was shocked.”

Among the other 18 articles and 15 book reviews is the text of Dr. David Fleming’s 2001 Feasta lecture on how we should respond to the threat that a catastrophic economic breakdown will occur in the next few years when the world’s oil and gas production begins to fall as the reserves are used up. Stan Thekaekara’s 2002 Feasta lecture is also there. In it, he describes how his thinking has been profoundly influenced by that of the tribal people among whom he works. “The economies of indigenous people are based on a concept of no ownership,” he says. “How can you ‘own’ the land, the water, the forests, the birds, the animals?”

Read a review of the book by James Robertson