The turbulence of the past year has made it clearer than ever that our growth-fixated, resource-squandering, and savagely unjust economy is neither viable nor desirable. There’s never been a more urgent or obvious need to shift onto an economic path that leads towards societal and ecological health.

For 24 years, Feasta has been at the forefront of this work, helping to lead the way towards new kinds of economic thinking. Our annually-revised Theory of Change spells out our current priorities and strategy. Our vision is bold, holistic, and global in scope – because that’s what’s needed.

While Feasta’s funds are modest, we take great care to make the most of them. Indeed, any mainstream economist who believes in prioritising efficiency should be impressed by just how far Feasta’s income can be stretched! 2022 has been a very active year for us. 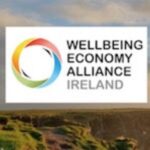 In Ireland, our home country, we made multiple submissions to the Irish government on the post-growth economy, and we produced a detailed paper which explored ways to ease expansionary pressure in Irish agriculture.

We contributed to three Irish national advisory groups, and we actively engaged in the process of developing an Irish wellbeing framework to more accurately measure societal progress. We also provided support for the Food for Thought event in Castlebar, County Mayo, and we’ve started an exciting new project with our Wellbeing Economy Alliance (WEAll) Ireland Hub colleagues that will harness the power of the arts in order to help bring about an economic narrative shift (keep an eye out for news on this in 2023!).

On the European level, we worked along with our colleagues in the Economic Transition Working Group of the European Environmental Bureau and fellow European members of the Wellbeing Economy Alliance to help to transform European Union thinking and policy, participating in a wide range of European meetings, conferences and workshops on topics ranging from fiscal policy to resource capping – as well as the Economic Doughnut street action that the EEB organised in Brussels in May.

Globally, our Cap and Share initiative for phasing out fossil fuels in an equitable manner caught the eye of the IPCC authors and was mentioned in one of their reports. We produced a paper outlining how the new Beyond Oil and Gas Alliance could be expanded into a global Cap and Share programme, helping to promote the goals of the Fossil Fuel Non-Proliferation Treaty.

We were also very pleased to start developing a new alliance involving Cap and Share with our colleagues at World Basic Income (and again, look out for more on this in 2023!).

Our podcast series Bridging the Gaps, produced in collaboration with the European Health Futures Forum and now in its third year, explored themes including data pollution, bioregionalism, a small farm future, communities of practice, housing, fossil fuel phase-out and healthcare, with input from a range of expert guests.
  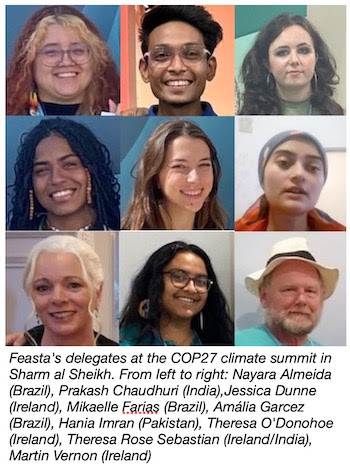 Finally, we were honoured to be able to support (with much-appreciated help from the Irish Environmental Network) a group of youth activists from around the world to travel to the COP27 UN climate summit in Egypt. We strongly believed they should have a chance to get their voices heard, and they made the most of that opportunity. You can read the eloquent and moving words of Hania Imran (from Pakistan), Amália Garcez (from Brazil), Theresa Rose Sebastian (from Ireland and India), Mikaelle Farias (from Brazil) and Jessica Dunne (from Ireland) here, along with a detailed report of the COP from Feasta veteran Theresa O’Donohoe.

In the past couple of years, we’ve been encouraged to see an upsurge in interest in degrowth, post-growth and doughnut economics worldwide, along with a recognition by at least some authorities that we need to change economic trajectory.

So, things are changing. But they aren’t changing enough – yet.

Many economics think tanks and other research bodies worldwide still unquestioningly swallow the Kool-Aid on infinite GDP growth – i.e., they assume that such growth is both possible and necessary. They also tend to pay scant attention to the underlying economic dynamics that are producing extreme inequality of power and wealth.

And to make matters worse, they often receive substantial financial support from governments to promote this ungrounded thinking.   (To give just one example, in 2021, a prominent growth-oriented economics think tank in Ireland received roughly fifty times as much government funding for its research as Feasta received in total income!)

At the moment, Feasta only has two paid staff, both of them part-time (two to three days a week each). The vast majority of our work is done through voluntary efforts.
If we can get so much done in a year with so few resources, just imagine what we could achieve if we had, say, four or five people who were able to put in serious time on this work.

So, here’s our pitch.

If you aren’t already supporting Feasta but think what we’re doing is important and wish to help us to achieve more, we would really appreciate if you would consider chipping in a small amount per month or per year. It could be as little as 6 euros per month. (If 40,000 people were to do this, that would bring our income up to the level of the growth-oriented economics think tank mentioned above! :-))

You can make a simple donation, or if you prefer, you can join Feasta, which will enable you to participate in our member activities. (You can find out more about membership by scrolling down this page.)

If you’re living in Ireland and give us more than €250 in the course of a year, this will grant you some tax relief, as we’re a registered charity.

To reiterate: we need a dynamic wellbeing economy, not a cancerous growth economy, and Feasta is helping to lead the way towards achieving this.

Even if you aren’t in a position to help us financially at this time, we hope you’ve found this round-up and the links it contains informative, and we wish all of our readers a constructive and invigorating 2023.