Over 40 people attended Lón Intinne / Food for Thought at GMIT Castlebar on Friday May 17 2019.

This is the second year of an event perfectly timed on the eve of the Afri Famine Walk. The event is a unique collaboration between Afri and Feasta with input from Teacht Aniar who have a special perspective on the Irish language.

John Hoban and Emer Mayock provided music to ground, enliven, entertain and provoke reflection throughout the day, and at lunchtime John sang a newly composed song he had especially written.

Joe Murray of Afri introduced Hannie Van Geel of Via Campesina, who emphasised that 70% of the world’s food is produced by small producers, the majority of them women. However, they are under threat, as large corporations seek to create patents and the trend in farming in general is for less labour and more capital. The big question for the future is: who is going to be producing our food – small-scale, sovereign grassroots producers or big companies? The EU’s Common Agricultural Policy and the FAO are directed towards large-scale farming. Public funds for research are directed at technologies such as drones, digitalisation, and new breeding technologies. The food sovereignty movement needs maximum participation from members of society: growing, cooking, writing, educating and advocating for small producers.

After a discussion with Hannie in which all took part, Joss and Ború Douthwaite facilitated a session in which all participants reflected on instances of transformation in which they had taken part or witnessed.

Participants brought delicious food to share at lunchtime, which highlighted the value of sharing as a way of being in the world.

After lunch, Anne Ryan picked out some themes from the morning’s work, emphasising those which created institutional and cultural barriers to transformation.

There is a strong sense that our state and the EU are putting barriers in the way of small farmers and producers and others who are pioneering a new economy. And yet, in spite of these barriers, thousands of people are already engaged in enterprises that are the seeds of a new socially just and ecologically sound economy. They are engaged in food and farming projects, in Community Supported Agriculture, in community gardening, in urban gardening, in repair cafés, in habitat restoration, in community energy projects and in housing cooperatives and cooperatives of all kinds – to give but a short and incomplete list. The people involved are barely making a living, in some cases are not even making a living from this vital work as there is little State support or recognition. Anne suggested that one of the ways that the state could demonstrate support for these people in the avant garde is to give everyone a universal basic income. This would put a floor of basic financial security under everyone and allow creativity and diversity in the ways people approach solutions to our crises. The State also needs to put legislation, grants and other institutional supports in place to help the pioneers get their enterprises off the ground.

John Hoban started the afternoon with his song about the four mountains of Mayo – Maol Rí (Mweelrea), Néifinn (Nephin), An Sliabh Mór (Slievemore) and Cruach Phádraig (Croagh Patrick) — which he sang for the first time in the outdoor space after lunch. He was inspired by two well-known hills in Leitrim – Sí Beag and Sí Mór, and included a theme of circular time, encapsulated in the refrain ‘I’m facing east but heading west’. Anne pointed out that the dominant modern conception of time is that of a straight line, or a narrow channel with an inevitable flow in one direction only, which allows for no restoration of what has been lost. Yet there are many other ways of looking at time that help us to understand its circular or counterflow aspects. It is possible to break out of the strong flow of the dominant ideology about what constitutes progress, especially if we work together to support each other in doing so. Seán Ó Conláin introduced the second guest speaker, Michael McCaughan. Michael emphasised the value of multilingualism as a help to seeing the world and acting in it in diverse ways. Speaking in Irish, Spanish and English he emphasised the importance of minority languages and cultures in today’s mono-cultural world, and particularly the link with local resilience.

After a discussion with Michael, the group took part in an open space session. The topics below were discussed in small groups and the feedback is outlined in the bullet points.

The day ended at 5pm.
Go mbeirimid beo ar an am seo arís! 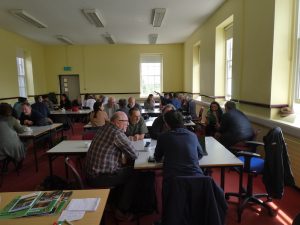