I hope to show that the bad news presented by our inevitable austerity is only bad for what can be happily lost. Laws of physics, which are about to disappoint European and American desires may simultaneously liberate us onto a lost Common. All that is best in life is encompassed by common humanity and is in no way reduced by a mere oil-deprivation. On the contrary, I hope to show that common humanity may be enchanted (by physics) to exercise its heart and head – that oil power had removed ingenuity and dexterity from most of us into the very few hands which have held the technologies of oil.

I have used Ivan Illich as my Pole Star to keep me on course. His books, De-schooling Society, Celebrating Awareness and Tools for Conviviality struck a chord with me forty and more years ago and it has been a pleasure to re-find him. He is my companion, but I could have accompanied many others and from any period in literary history, because what makes us human (and potentially happy) cannot be changed by political and environmental change.

I am a farmer, who once felt companionship in an organic movement, but now feels alienated by its progress into the utterly destructive retail park.

My purpose is to assert my first principles and to renew my hopes for the future, so that the ephemeral schisms presented by NGOs, corporations, schools, universities and governments are not overwhelming. I break my association with the ephemera, but maintain it with a deeper history through which an identical humanity has wandered. I remind myself of the source of the generation of all our settlements: the Commons of Sea and Soil.

The Commons of Soil

We have picked up our fossils and minerals because they have been lying around. We have done so more and sometimes less judiciously. They have been sources of wealth, power and injustice. They have received no valuation beyond cost of extraction and competitive bidding for degrees of scarcity.

However soil is provident as a consequence of behaviour. If the night soils of London are not returned to the fields which have fed her, she will not be fed in return. Soil is not lying around (like coal and oil) to be shared out. It breeds consequence. Soil is provident by the virtuous actions of the community it feeds and so it follows that civic communities are the cultures of soil. It also follows that we are tied in virtue to soil-bound laws of physics and biology. The biology is particularly significant, because soil is alive and is variably vivacious. Soil can also die. Dying soil is a complexity of many symbiotic deaths.

We note that such virtue is traditionally found in labour, craft, dwelling and suffering supported, not by an abstract earth, environment or energy system, but by the particular soil these very actions have enriched with their traces, says Ivan Illich (Declaration on Soil 1990). He continues:
Yet, in spite of this ultimate bond between soil and being, soil and the good, philosophy has not brought forth the concepts that would allow us to relate virtue to common soil, something vastly different from managing behaviour on a shared planet.

Modernism has transcended soil by oil and oil’s technologies. Now she must descend through the veils of transcendence like a falling St Teresa; through the veils of Maya; those Clouds of Unknowing; through all the retail parks of all the retail heavens and back to laws of physics and the rule of return (dust to dust). She’ll find herself as living protein seeking nervous and metabolic connection to other living proteins. Her days of levitation by the powers of fossil protein have passed. The metaphysics of oil has passed. Now we shall have the physics of soil and the enlivening curiosity that comes with it.

A tentative calculation is that one litre of oil may be replaced by ten days of toil. Since civilization is a method and not a state, the above defines the shift we must make in devising methods of living together. Without fossil life we are bonded to life and so to soil. Soil can feed only if fed in return. And so it becomes the foundation of virtue. How much money do we pay for two weeks of hard labour (even slave labour) and how much for a litre of oil?

The fossilised proteins of millions of summers have provided for us to live as Ivan Ilich says, by simply managing behaviour on a shared planet. We have allotted our fossil shares sometimes justly, sometimes unjustly, but that distribution has been the focus of virtue. Now Europeans have shared the fruits of not only one planet but three (two composed of fossilised creatures and forests). Their ignition and gaseous release through the last few decades has disrupted the balancing of living respirations. So, even if we continue modernist behaviour and methods of distribution (and virtue), our primary pot must be a third of the accustomed size. Modernist virtue faces a world of confusing austerities. It can guess at (and measure components of) anthropogenic climate change, but the unchanged focus of its virtue remains the re-distribution of a diminished pot.

However as Ivan Illich suggests, if we shift our focus from the virtues of distribution (the management of scarcity) to the virtues (in skill, husbandry and study) of soil, we will find a world more rich in possibility. We move from passive acceptance of space to a dynamic symbiosis with life (soil) and the unpredictable movements of biological time. What we do becomes both socially and ecologically significant and so an identified self-worth and its resultant happiness can grow. Civilisation is not an achieved state, but is a method of settlement. Or rather it is a complexity of methods, since we civilize citizen by citizen. Since towns and villages are emergent properties of agricultural efficiency, civic virtue remains tied to soil.

Almost anything disagreeable, unsavoury, or vexing can be understated by slow degrees until it vanishes, says Douglas Dunn in his short story, Seven Farms.

And so we have the historic attitude of governments, hierarchies and settled middle classes.
Most Green organisations, such as Friends of the Earth, Green Peace, the Centre for Alternative Technology, the Soil Association and so on see the coming austerity and are upset by the governing understatement. But they’d be governed by the modernist virtues of simply managing behaviour on a shared and shrinking planet.

Simply managing behaviour is world away from behaviour connected to the virtues of soil; to the commons of soil; to the dexterities of husbandry; to the pleasures of cuisine and as Ivan Illich says, to the particular soil these very actions have enriched with their traces. 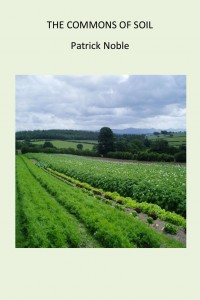 This is an excerpt from Feasta member Patrick Noble’s new book, The Commons of Soil. We’ll be publishing further excerpts over the next two weeks. The book will be published on 5th August and will be available then at www.bryncocynorganic.co.uk for £7.00.

One Reply to “The Commons of Soil”