I recently had the privilege and pleasure of accepting a Lifetime Achievement award on behalf of Mary Douthwaite for her husband Richard, who passed away last year. Richard was a good friend and having the opportunity to talk about him and remember his energy and enthusiasm for life, economics and everything was a real treat.

When Mary found out Richard had received the award she was touched and said she thought people would have forgotten Richard by now. Mary! Richard not only challenged our thinking and came up with new ideas for solving economic problems but what makes him unforgettable is that for many of us, he was the first to introduce us to an alternative view of how we run our world and the challenges we have created for ourselves. 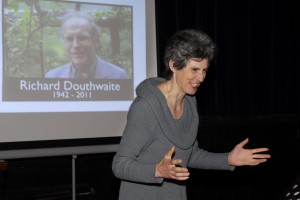 In the 90’s I was working in the City of London in The London Stock Exchange and I wanted to understand why interest rates changed. I don’t remember how I ended up with The Growth Illusion, was it selling in Waterstones in Leadenhall Market at the very heart of the financial centre? That book was the first economics text that made any sense to me and it was from then that my interest in economics, sustainability and the environment grew. Incidentally, The Growth Illusion is still for sale on Amazon and it has a unanimous five star rating. How could I forget the man who first opened my eyes to a whole new way of looking at the world. Shortly after finishing the book, feeling very bold, I found Richard’s number and called him with a couple of questions. We talked for a long time and that was the start of our friendship. I’m sure many of those reading this had a similar experience. For others, it was listening to Richard talk passionately on a wide range of subjects, at a larger international conference or a small group gathered in a pub, that was the start of a new journey. They will not forget the man who showed them a different path, less travelled, and much more interesting. We have followed many paths since Richard opened our eyes, but wherever we end up, we will not forget the man who started us on that journey.