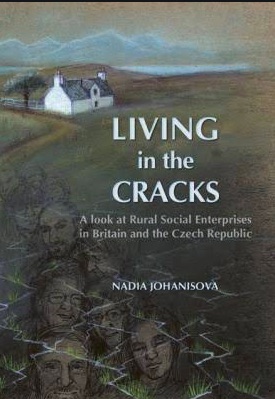 Living-and often thriving-in the cracks between the business world and the state system is an amazing variety of organisations which, according to some economists, theoretically shouldn’t exist. That’s because their goal is not to make profits but to meet social needs which both the market and government either can’t meet nearly as well or have totally ignored.

There’s not even a good collective name for these organisations, although Third Sector is often used and causes most people’s eyes to glaze over. Yet, as this book shows, all human life is there. Based on dozens of interviews with people who have set up and run these organisations, it shows how their struggle to carry their ideals forward has led to lives with more joy, fulfilment and satisfaction than is normally found in commercial life or the civil service.

But the book has a far greater importance than that. By comparing and contrasting the organisations she visited in Britain with those in the Czech Republic, Nadia Johanisova is able to establish just what is so valuable about them and how they can be helped to multiply and flourish.

In a world increasingly dominated by giant companies for whom communities mean nothing, and in which the state sector is constrained by limited budgets and tight rules, organisations such as those described here are going to be needed everywhere if we are not to have major gaps in our lives and
in the services available to us. Written in an entertaining personal style, this book will not only inspire and guide many of those who will decide to meet those needs but will also enable them to get in touch with some of the pioneers mentioned in its pages.

PDF documents will open in your browser. However they can be large documents and so this may take some time. To download the documents directly to your hard drive right-click on the document link and choose ‘Save Target As..’