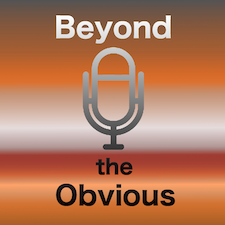 Our pilot podcast series, Beyond the Obvious, was co-organised by Feasta and the European Health Futures Forum.

The hosts, Seán O’Conláin and Caroline Whyte, explored a range of topics with guests from a wide variety of backgrounds. There are six monthly podcasts of 20-30 minutes, released between March 15th and September 17th 2019. (We took a break in August.) Please feel free to comment below.

Our thanks to Laoise Kelly who gave us permission to use her harp music. The piece is ‘Lon dubh’ (Blackbird) from her Album ‘Ceis’.

Podcasts are listed below from the newest to the oldest.

In this podcast we discuss agriculture, a highly problematic sector of the Irish economy. We talk to two farmers who are working hard to improve this situation: Nathan Jackson, an agroecological farmer involved in Community Supported Agriculture (CSA) projects in the Dublin area (including Derrybeg Farm in Celbridge) and Fergal Anderson, who runs the Leaf and Root Farm near Loughrea in county Galway and who is also a member of the core group of the new farming organisation Talamh Beo, part of the Via Campesina network.

Topics mentioned include the experience of running a CSA, the potential effects of Brexit, the damage caused by overly globalised agriculture and how to stem rural decline. More broadly, we discuss wider policies that are needed in order to radically shift the focus of Irish farming towards regeneration within a very short time frame. Priorities include shortening supply chains for vital goods by localising agriculture, and supporting initiatives that provide access to land for farmers along the lines of Terre de Liens in France.

Podcast 5: The future of healthcare

For our fifth podcast we welcome guest host David Somekh of the European Health Futures Forum. David hosts a round table discussion with three guests: Zuzanna Cichon, a master student in Global Health at Maastricht University who is currently in Barcelona working on her thesis about the predictive capacity of climate variables for dengue epidemics in Venezuela, and who provides an overview of the state of global health; Matthijs Zwier, who is involved with the Health Pact project in Utrecht which facilitates a collaborative movement to help citizens have direct input into the development of a healthy and happy urban life for everyone; and Mike Bewick, a doctor and former national deputy medical director for the NHS in the UK, who describes some of the major changes that are happening in health care.

Other topics covered include the opportunites and crises that healthcare is now facing on a global level; the need to build solidarity; the potential for place-based initiatives to improve health in communities; the impact of the energy transition on mental health; the need to focus on upstream measures to improve health; and the societal factors that contribute significantly to illness.

As Greta Thunberg has observed (and as Professor Clive Spash explained in our second podcast, back in April), ‘green growth’ isn’t a realistic option in an economy that is hitting against resource limits and severe ecosystem degradation. So we need to think hard about how to transition to a growth-neutral financial system. There are plenty of good social reasons for this transition, too.

This podcast begins with a brief excerpt from our archives in which Richard Douthwaite explains the link between our current debt-based money system and economic growth. This is followed by a discussion with Mary Mellor, Emeritus Professor at Northumbria University, who has published extensively on alternative economics integrating socialist, feminist and green perspectives, and Graham Barnes, a Currency Innovation Strategist and co-organiser of Feasta’s currency group.

Topics covered include the role that debt-free money has played historically, money as a commons, sufficiency provisioning to ensure everyone’s needs are meant within ecological constraints, participatory budgeting, myths about the role of the market in the economy, and complementary currencies.

Podcast 3: Identity, ownership and the commons

This episode questions some assumptions that are commonly made about identity and ownership and explores the commons as an alternative paradigm. First we hear the poet Paddy Bushe reading his Migrant Poet’s Ecological Manifesto, in which he interprets the Song of Amergin, and the story behind it, in a way that reflects the reality of a migratory world, largely post-national, threatened with extinction because our overwhelmingly exploitative relationship with the land and the sea.

Then we interview Órla O’Donovan, a lecturer in Applied Social Science at University College Cork who has done extensive research into the commons as an alternative to state- or market-based ownership and management. She gives us her reaction to Paddy’s Manifesto and goes on to discuss the cult of the individual, the Nowtopia movement and the politics of water in Ireland, among other topics.

Podcast timeline:
A Migrant Poet’s Ecological Manifesto, written and read by Paddy Bushe : 1:39
Órla O’Donovan reacts to Paddy’s manifesto and answers our questions about the commons: 4:05

In this episode we examine the notions of progress and improving welfare for all. We start with a poem by Zheng Xiaoqiong about her experience as an assembly line worker in China’s industrial belt. Then there’s an interview with Doctor Benjamin Held, who discusses the research he and colleagues at the FEST institute have been doing on developing an alternative index of well-being to GDP. Finally, there’s an interview with Professor Clive Spash, who critiques the claim that countries such as Sweden are managing to decouple their GDP growth from their greenhouse gas emissions.

Bonus (‘appendix’) podcast: An uninterrupted reading by Zheng Xiaoqiong of her poem ‘Assembly Line’ in her native Sichuan dialect, followed by an English version read by the poem’s translator Yu Yan Cheng, and finally a Mandarin Chinese version.

We hear from two 11-year-olds, Eve O’Connor and Beth Malone, who are involved in the schools climate strikes movement, and from Professor Barry Mc Mullin, who takes us through the pros and cons of the possibilities for decarbonising Ireland’s energy supply: nuclear; fossil fuel with carbon capture and storage; BioEnergy; wind; renewable energy with electrofuel; and reducing consumption, particularly by high emitters. This last option, which is supported by Feasta’s climate group members, forms a key part of our Cap and Share and CapGlobalCarbon initiatives. (There wasn’t time for Barry to go into a final possibility – Carbon Dioxide ‘removal’ – but he’ll do so at a later date.)

3 Replies to “Beyond the Obvious: novel podcasts for enquirers”