A Thinkery on Water Commons was held in UCC on Friday, June 23rd. This event was jointly organised by Feasta’s Water Commons group and Orla O’Donovan from UCC, Patrick Bresnihan from TCD, and Kevin Flanagan. There were a total of sixty participants. The event was over-subscribed with quite a number of people therefore unable to attend. The Thinkery was however recorded for video and this should be available in a month or two.

The following is a very brief Report on the event. There were five parts to the Thinkery, each of which lasted an hour.

The first part was facilitated by Roisin O’Gorman from the Theatre Department of UCC. She guided participants in a bodily exercise designed to enable us connect with the water within us. We are after all composed of at least 50% water. This was a very calming exercise which also involved challenging our dominant metaphors of field and space in favour of water metaphors such as flow, pool, lapping and so on.

Next, Patrick Bresnihan led a dialogue with Miriam Planas who is a leading figure in the Barcelona movement Aigua es Vida and is a member of the European Water Movement. Her contribution explored the campaign in Barcelona to reclaim popular control of the local water supply from private, corporate interests. A central concept in this is the principle of ‘Re-Municipalisation’ which has become a very important political principle in many parts of Europe. The idea is to get municipal authorities, which are subject to democratic authority, to re-take ownership of the water supply and distribution. A significant spur to this has been the very high number of people whose water supply has been cut-off by the private corporate providers due to non-payment of fees. In this sense, re-municipalisation offers one model for commoning water.

Orla O’Donovan then facilitated a dialogue with Marco Iob from the Italian Forum of Water Movements and the European Water Movement. He reported on the highly significant popular political campaign in Italy to ensure public ownership of the water supply. This centred on the principal of water as a public good and not as a commodity to be bought and sold in market conditions. This campaign culminated in a popular consultative referendum in which more than 50% of the Italian electorate voted in favour of the public control of water. This democratic mandate has however been so far ignored by the Italian government and mainstream political parties.

Mark Garavan next dialogued with Chas Jewett who is a Lakota-Dakota indigenous American from South Dakota. Chas placed her nation’s concept of water within the wider narrative of deep oppression and genocide of the indigenous peoples of the American continent since the European Conquest 500 years ago. She gave searing personal testimony of systemic abuse and violations of native people. Chas was a leading organiser of the recent Dakota Pipeline protests. These protests have mobilised native resistance and brought many native young people to political engagement. In this way, she ended on the hopeful note that indigenous perspectives offer a crucial cultural resource for how we might connect with the natural world and its multiple elements and energies. 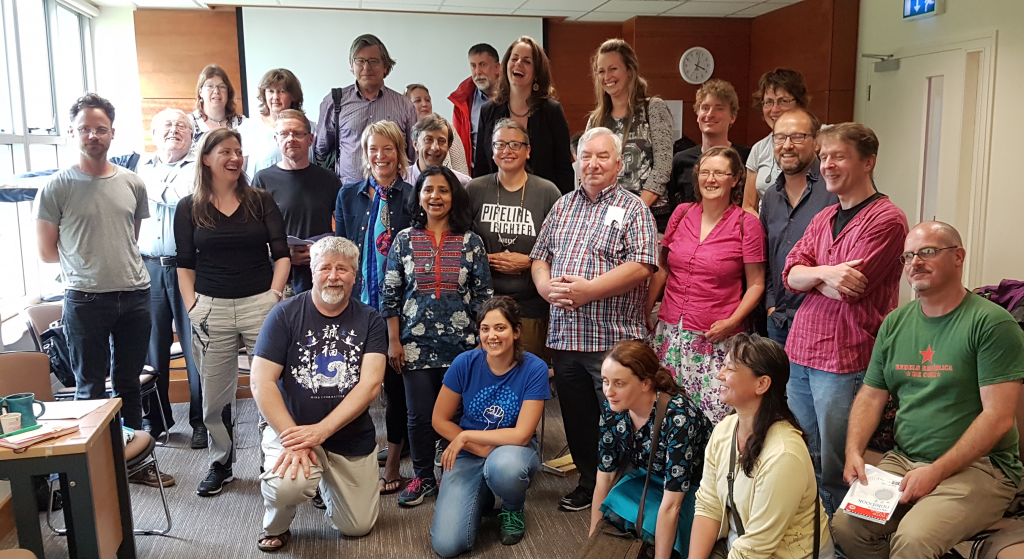 Finally, a highly engaged discussion took place among the participants. It is impossible for me to do justice to this. Key themes however were:

The event was a genuinely inspiring and hopeful experience. Johannes Euler from the Feasta Water Commons group travelled over from Germany to participate. We hope to build on this event with further gatherings and proposals in the near future.

Mark Garavan lectures in social care in the Galway-Mayo Institute of Technology. He is the author of Compassionate Activism: An Exploration of Integral Social Care. He is a member of Feasta’s Board of Directors.