Journey to Earthland by Paul Raskin is an unusual work. It is not primarily an analysis of our present predicament or of our likely future. It is not an essay or a polemic. It is rather an evocation of an imagined benign future when all humankind will unite in a global ecological perspective where their common home will be designated as ‘Earthland’. It is a type of non-fiction fable or a dreamtime possibility of what might be. In this sense, the book sets out to serve as a destination, or orientation point, to guide our contemporary efforts to achieve a just and ecologically compatible human society. The logic is that we need to know where we are going in order to get there.

It is likely that most thoughtful people today experience future possibilities as fearful. All the objective signs – political, social, ecological – appear largely negative. It seems clear that a crash or major rupture of our economic model is coming as well as an abrupt shift in our climate stability. Efforts at reform have proven to be too weak and inadequate. Journey to Earthland positions itself right in the midst of this foreboding.

‘A central proposition grounds the hope hypothesis: the very forces driving the global emergency are also creating the basis for transcending it’ (111). 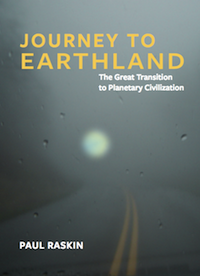 This hope is grounded on the notion that humanity has entered into a ‘Planetary Phase of Civilization’, i.e. a recognition of the deepening interdependence of humanity and Earth into a single community of fate. The book assumes a profound transformation is occurring on a par with previous transformations such as the advent of the Stone Age 100,000 years ago, of Early Civilization 10,000 years ago, and of the Modern Age 1,000 years ago. This new transformation of the last number of years has moved us ‘from a world of strangers to a commonwealth of citizens.’ (24) In short, Raskin suggests that a dream of a congenial world commonwealth is now possible.

‘All the disruption and upheaval we confront are the birth pangs of the global entity herein christened Earthland’ (5).

What justifies this hope? Primarily, it is he says the empirical reality of growing interdependence and connection revealed in shared challenges such as climate change, the digital revolution, the end of the Cold War, economic globalisation, and the emergence of global actors such as a global citizens movement under the slogan that ‘another world is possible’.

‘The Planetary Phase is entangling people and places in one global system with one shared destiny’ (14).

In addition, the present politico-economic model is clearly collapsing. Its problems are manifold:

‘perpetual growth on a finite planet; political fragmentation in an interdependent world; widening chasms between the privileged and the excluded; and a stifling culture of consumerism’ (10).

The barrier to collective mobilisation for change however is our outmoded and inaccurate ideas:

For this reason, and of course for reasons of power and advantage, a number of possible futures are open to us. Raskin categorises them as threefold:

Conventional Worlds continue in familiar ways with a contest between advocates of pure market forces and policy reformers. However, these conventional approaches may simply be overwhelmed by the deluge of crises emerging – ‘social polarization, geopolitical conflict, environmental degradation, economic failure, and the rampaging macro-crisis of climate change’ (27). In this case either a fortress world or complete breakdown becomes possible in a barbarised social chaos.

By contrast, ‘Great Transitions’ imagine the positive opportunity of addressing and resolving collectively these systemic problems. Raskin suggests two possibilities here. One is of an eco-communalism of autarkic communities and small-scale enterprises guided by face-to-face democracy. The other possibility Raskin designates as the ‘New Paradigm’ which imagines a world both plural and unified, local and global, self-governing but with global governance structures also.

In essence, the book becomes an evocation of this idealised ‘New Paradigm’ global world. Its primary agent of change is the emerging global citizens’ movement.

‘A double force – the push of necessity and the pull of desire – propels a Great Transition’ (45).

This movement is brought into being, he argues, by material foundations such as global communications, by shared risks, and by interdependence. It is characterised by a desire for holistic and connected modes of being. Raskin presents a hopeful scenario that suggests that a ‘New Paradigm’ of global governance will inevitably lead to better quality of life regarding population stability, worktime, poverty, various quality of life indicators generally, energy reduction, less climate change, better quality diets, natural habitat improvements, and freshwater recovery. The key barrier to achieving this is not technical but cultural and political. The planet is ‘the natural boundary for human affairs’ (63).

Of course, the Global Citizens Movement will not simply emerge and succeed. It requires system vulnerability, organisational capability, and global cultural solidarity.

The final part of Raskin’s book is his description of this new Earthland. What would it look like? It will, he imagines, be shaped by three core values: quality of life, human solidarity, and ecocentrism. Its political philosophy will be characterised by the principle of constrained pluralism, manifested in the sub-principles of irreducibility, subsidiarity, and heterogeneity. In short, this will be One World but of Many Places. These places will be diverse and self-governing with global structures only operating in necessary and limited functions appropriate to their role. Many local systems will operate such as free market communities, communities of economic democracy, and low-tech, self-sufficient communes. A global government, subject to a global citizens Assembly, will have distinct areas of responsibility: rights, biosphere, security economy, and culture (such as heritage preservation, world university system, intellectual property).

In the concluding part of the book Raskin imagines this future world in regard to people, time, education, spirituality, social justice, and environment. All are evoked in the highest possible positive terms.

What is one to make of this text? Is its description of a possible future plausible? Perhaps that does not matter. The future after all is literally unknowable. Anything might happen. What is clear is that the current system is broken and will certainly crash. The question is what lies beyond this rupture? Breakdown or re-building? It may well be that the climate will shift abruptly into a new state which will be incompatible with human life or at least with large-scale human civilisation. What then?

Raskin’s book simply constructs a possible scenario not so much as a prediction but as a map which we can use if we can mobilise collectively into a common movement which leads the human community forward. It is a dream possibility not a programme. As we survey the world today this seems both less likely but more necessary than ever. The dark forces of barbarization are clearly stirring now and moving to occupy the disintegrating market system. Perhaps, as Raskin suggests, it is only now – when finally everything is at stake – that progressive forces can finally mobilise on the scale needed. Meanwhile, the planet itself is moving and becoming active whether we respond or not.

Mark Garavan lectures in social care in the Galway-Mayo Institute of Technology. He is the author of Compassionate Activism: An Exploration of Integral Social Care. He is a member of Feasta’s Board of Directors.