Closed loop agriculture is farming practice that recycles all nutrients and organic matter material back to the soil that it grew in. This forms part of an agricultural practice that preserves the nutrient and carbon levels within the soil and allows farming to be carried out on a sustainable basis.

Current farming practice (as shown in Figure 1) relies heavily on imported nutrients to sustain high production. We eat the food; and then the nutrients and biomass from faeces and urine are flushed away via our toilets. The sewage is treated, to a greater or lesser extent, to limit its potential to cause water pollution, and then discarded to groundwater, rivers or the sea. This practice requires high fossil energy inputs for fertiliser manufacture, causes pollution to our waterways, and strips organic matter from the soil which in turn reduces productivity, overall soil health and structure.

Most of the sludge arising in the EU is of agricultural rather than human origin, and this is returned to the soil as part of standard farming practice. Biosolids (treated sewage sludge) are also increasingly returned to the land. However, the process of sewage treatment reduces the potential biomass and nutrient resource available for recycling, so current practice still essentially wastes these resources, while adding to the pollution of our waterways. By capturing the nutrients that currently make their way into sewage, we can feasibly eliminate water pollution from this source. By composting humanure (and farmyard manures) and converting it to humus before application to the fields, the soil can hold more moisture and withstand erosion more effectively than when artificial nutrients or even uncomposted slurry or manure are used. Also, by incorporating humus into the fields the filtering capacity of the soil is maximised. Thus we can dramatically reduce our water pollution from agriculture as well as from sewage.

Note that manures from animals comprise roughly nine times the quantity of potential humanure (human manure) in Ireland. The management of this farmyard manure and slurry can be improved for energy generation through anaerobic digestion or can be composted for greater carbon sequestration. Other regenerative agriculture techniques may also be used for greater soil building and sustainability. However for the purposes of this report, the focus is upon returning the biomass and nutrients from humanure and urine to agriculture. 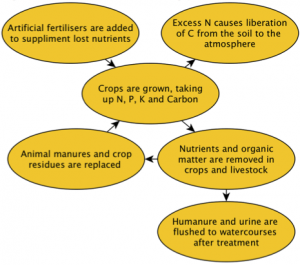 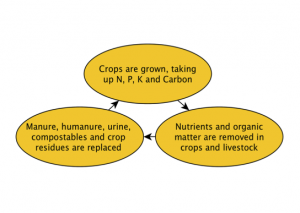 Closed loop agriculture has direct benefits for biodiversity also, within the soil itself, in the aquatic environment, and within the context of climate change:

1. Soil ecosystems are amongst the most diverse on earth, hosting c.25% of all of the species on the planet1. A single gram of grassland soil may contain over one billion organisms with as many as ten thousand different species of bacteria and fungi2. Healthy soils are vital for biodiversity, human health and climate regulation. Our own species derives 95% of our food from the soil3, whether directly or indirectly. Closed loop agriculture can build a healthy soil ecology by reducing artificial nitrogen inputs and by returning soil organic matter.

2. The health of the aquatic environment and aquatic biodiversity in Ireland is directly related to protection from water pollution. Key indicator species such as the freshwater pearl mussel live only in high quality rivers and streams. High status water bodies have fallen in number from almost a third of all monitoring sites in the mid 1980s to under one fifth4. Clean water, free of pathogens and the chemicals added to kill them, is also vital for our own health and wellbeing. Closed loop agriculture can protect and enhance water quality by eliminating pollution from sewage and by returning agricultural nutrients to the land in a way that is bound up in humus, and thus more stable and resistant to erosion in field runoff.

3. Climate change has already had a significant impact on biodiversity. Many animal species on land, in rivers, lakes and seas have moved geographical ranges, changed seasonal activities and migration patterns and have altered abundances and species interactions5. The long term impacts on biodiversity may be devastating as temperature range movement outstrips the ability of plant species, small mammals and freshwater molluscs, for example, to migrate; as oceans face dropping oxygen levels and greater acidification; and as coastal and low-lying areas are lost to sea level rises (IPCC, 2014). Closed loop agriculture can help to reduce the degree of climate change by cutting back on energy intensive artificial nitrogen production as well as by sequestering carbon in the soil. It can also reduce the impact of climatic extremes by building healthy, humic rich soils which provide greater resilience to drought and flood conditions, both within the field scale for food production, and within the wider catchment scale for ameliorating flooding.

This report is set out in three sections, as follows:

Part 1 Nitrogen:
The impacts of artificial nitrogen manufacture on the climate, the impacts of its use on the soil, and the potential for closing the loop and reusing nutrients from human excreta to grow our food.
Part 2 Carbon:
The impacts of excess atmospheric carbon on the environment, the potential for sequestering carbon in our farms as soil organic matter, and the opportunities for adopting soil-building farm management practices.
Part 3 Implementation and Policy:
The methods of humanure and urine separation and recovery, overview of international best practice, current Irish policy and proposed policy amendments to facilitate closed loop agriculture in Ireland.

Acknowledgements:
This project was facilitated with the financial support of the Irish Environmental Network under the Biodiversity Policy Funding package from the Department of the Environment, Community and Local Government. 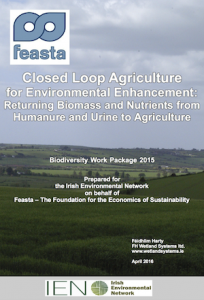 Féidhlim Harty is director of FH Wetland Systems environmental consultancy in Ennis, Co. Clare specialising in constructed wetland, reed bed and zero discharge willow facility systems. He is the author of Get Rid of Your Bin and a new ebook just out from Permanent Publications called Septic Tank Options and Alternatives – Your Guide to Conventional, Natural and Eco-friendly Methods and Technologies.