In a lecture to the Columbia University Center on Global Energy Policy in February of 2014 Steven Kopits, who is the Managing Director of the consultancy, Douglas Westwood explains how conventional “legacy” oil production peaked in 2005 and has not increased since. All the increase in oil production since that date has been from unconventional sources like the Alberta Tar sands, from shale oil or natural gas liquids that are a by-product of shale gas production. This is despite a massive increase in investment by the oil industry that has not yielded any increase in ‘conventional oil’ production but has merely served to slow what would otherwise have been a faster decline.

More specifically the total spend on upstream oil and gas exploration and production from 2005 to 2013 was $4 trillion. Of that $3.5 trillion was spent on the ‘legacy’ oil and gas system. This is a sum of money equal to the GDP of Germany. Despite all that investment in conventional oil production it fell by 1 million barrels a day. By way of comparison investment of $1.5 trillion between 1998 and 2005 yielded an increase in oil production of 8.6 million barrels a day.

Further to this, unfortunately for the oil industry, it has not been possible for oil prices to rise high enough to cover the increasing capital expenditure and operating costs. This is because high oil prices lead to recessionary conditions and slow or no growth in the economy. Because prices are not rising fast enough, and costs are increasing, the costs of the independent oil majors are rising at 2 to 3% a year more than their revenues. Overall profitability is falling and some oil majors have had to borrow and sell assets to pay dividends. The next stage in this crisis has then been that investment projects are being cancelled – which suggests that oil production will soon begin to fall more rapidly.

The situation can be understood by reference to the nursery story of Goldilocks and the Three Bears. Goldilocks tries three kinds of porridge – some that is too hot, some that is too cold and some where the temperature is somewhere in the middle and therefore just right. The working assumption of mainstream economists is that there is an oil price that is not too high to undermine economic growth but also not too low so that the oil companies could not cover their extraction costs – a price that is just right. The problem is that the Goldilocks situation no longer describes what is happening – another story provides a better metaphor – that story is ‘Catch 22’. According to Kopits the vast majority of the publically quoted oil majors require oil prices of over $100 a barrel to achieve positive cash flow and nearly a half need more than $120 a barrel. But it is these oil prices that drags down the economies of the OECD economies.

For several years however there have been some countries that have been able to afford the higher prices. The countries that have coped with the high energy prices best are the so called “emerging non OECD countries” and above all China. China has been bidding away an increasing part of the oil production and continuing to grow while higher energy prices have led to stagnation in the OECD economies. (Kopits, 2014)

Now lets put that in a bigger context. In a presentation to the All party Parliamentary Group on Peak Oil and Gas Charles Hall showed a number of diagrams on slides to express the consequences of depletion and rising energy costs of energy. I have taken just two of these diagrams here – comparing 1970 with what might be the case in 2030. (Hall C. , 2012) What they show is how the economy produces different sorts of stuff – some of the production is consumer goods – either staples (essentials) or discretionary (luxury) goods. The rest of production is devoted to goods that are used in production – investment goods in the form of machinery, equipment, buildings, roads, infrastracture and their maintenance. Some of these investment goods must take the form of energy acquisition equipment. As a society runs up against energy depletion and other problems more and more production must go into energy acquisition, infrastructure and maintenance – less and less is available for consumption, and particularly for discretionary consumption. 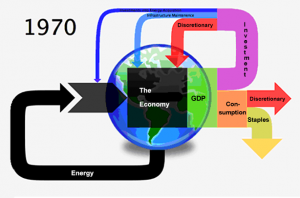 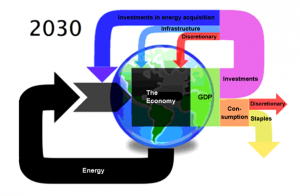 Whether the economy would evolve in this way can be questioned. As we seen the increasing needs of the oil and gas sector implies a transfer of resources from elsewhere through rising prices but the rest of the economy cannot actually pay this without crashing. That is what the above diagrams show – a transfer of resources from discretionary consumption to investment in energy infrastructure. But such a transfer would be crushing for the other sectors and their decline will likely drag down the whole economy.

Over the last few years central banks have had a policy of quantitative easing to try to keep interest rates low – the economy cannot pay high energy prices AND high interest rates so, in effect, the policy has been to try to bring down interest rates as low as possible to counter the stagnation. However, this has not really created production growth – it has instead created a succession of asset price bubbles. The underlying trend continues to be one of stagnation, decline and crisis. The severity of the recessions may be variable in different countries because competitive strength in this model goes to those countries where energy is used most efficiently and which can afford to pay somewhat higher prices for energy. Such countries are likely to do better but will not escape the general decline if they stay wedded to the conventional growth model. Whatever the variability this is still a dead end model and at some point people will see that entirely different ways of thinking about economy and ecology are needed – unless they get drawn into conflicts and wars over energy by psychopathic policy idiots. There is no way out of the Catch 22 within the growth economy model. That’s why de-growth is needed.

Brian Davey graduated from the Nottingham University Department of Economics and, aside from a brief spell working in eastern Germany showing how to do community development work, has spent most of his life working in the community and voluntary sector in Nottingham particularly in health promotion, mental health and environmental fields. He helped form Ecoworks, a community garden and environmental project for people with mental health problems. He is a member of Feasta Climate Working Group and former co-ordinator of the Cap and Share Campaign. He is editor of the Feasta book Sharing for Survival: Restoring the Climate, the Commons and Society, and the author of Credo: Economic Beliefs in a World in Crisis.

One Reply to “Peak Oil Revisited…”