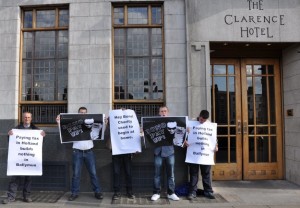 This photo was taken yesterday outside The Clarence Hotel in Dublin. This luxury hotel is partly owned by Irish rock star Paul Hewson (aka Bono), who has become a focal point for Irish protesters concerned about the level of tax avoidance by that country’s elites.

Patent Boxes: An innovative way to race to the bottom?

Governments around the world are grappling with the question of how to tax the income from intellectual property. This column asks whether offering tax breaks – called Patent Boxes after the box companies must tick on their tax forms – will lead to a race to the bottom across Europe and who, if anyone, benefits.

Full Article: Patent Boxes: An innovative way to race to the bottom?

ECOSOC: the world needs an intergovernmental commission on tax cooperation

TJN advocates for international cooperation to protect nations from abusive tax practices, including evasion and the race to the bottom in corporate taxation. This can only be achieved through a legitimate global organisation with recognised political status. No such organisation currently exists. The OECD is the pretender to this position, but lacks legitimacy and too many of its prominent members are tax havens/secrecy jurisdictions. We therefore advocate for the United Nations to strengthen its role in this area by creating an Intergovernmental Commission on International Cooperation on Tax Matters (the political body) supported by an advisory Committee of Experts along the lines of the existing Committee (though far, far better resourced).

Art Uncut have an article in the Guardian this morning on their objectives. They say:

Art Uncut aims to bring about a culture shift, to create a world where people automatically and instinctively think about tax ethically.

First, we want to empower people to “Just Say No!” to the tax accountant.

I’ve been reflecting on the situation in Greece and have pointed out that much of what is happening is the inevitable consequence of neoliberal thinking.

So too is the fact that Greece suffers endemic tax evasion. It is thought that 30% of revenues are lost to evasion in Greece, with the rich being especially prone to non-payment.