The Greek bailout provides an opportunity for privatization grabs

When Greece exchanged its drachma for the euro in 2000, most voters were all for joining the Eurozone. The hope was that it would ensure stability, and that this would promote rising wages and living standards. Few saw that the stumbling point was tax policy. Greece was excluded from the eurozone the previous year as a result of failing to meet the 1992 Maastricht criteria for EU membership, limiting budget deficits to 3 percent of GDP, and government debt to 60 percent.

He ends his tour de force describing the financial conquest of the European peoples thus..

..But ECB intransigence leaves little alternative to breakup. Europe’s payments-surplus nations are waging financial war against the deficit countries. Without a common union based on mutual support within a mixed economy – one capable of checking financial aggression – the European Central Bank replaced the military high command. Its bold gamble is whether the Greeks will be as stupid as the Irish, not as smart as the Icelanders. (link to article) 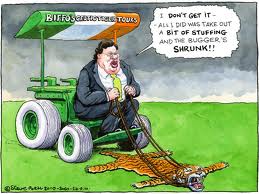 This is the second in a series of articles about the ECB/EU/Euro crisis. Ireland is not like Greece. It ran a budgetary surplus during its boom. It privatized and reduced work restrictions. Its budgetary crisis would be serious because it suffered from one of the worst bubbles (relative to GDP) in history and it lacks a sovereign currency. Ireland’s budgetary crisis is crushing because its political leadership, gratuitously, decided that a nation of four million people should bail out the creditors of Irish banks even though it had no legal or moral obligation to do so and was incapable of doing so. The Irish banks’ creditors were primarily foreign, particularly foreign banks. Absent the Ireland’s failed and quixotic attempt to bail out the German banks Ireland would not be in a sovereign debt crisis. (link to article)

Randall Wray was interviewed recently for The Real News. Video below.

More at The Real News