Excellent post by Ronan Lyons on his blog.  Smart taxes is negotiating his services to find exactly how much a Site Value Tax can raise and how quickly it could be implemented in Ireland, to report by Autumn this year.  Geographical Information Systems (GIS) and better property databases have simplified this work beyond the valuation professionals imagination. It is extraordinary  that the Department of Finance has not made any moves to initiate a  SVT, despite it being part of the Troika deal and despite being in the Programme of two governments.   What or who is holding them back?  Facing up to the vested interests to bring in a property tax is one of the few good things to come out of the whole property and banking crisis.  A flat tax, whatever its name, will harden opposition to any kind of  property tax – is that the Department’s objective?.

As readers of this blog are aware, though, I’m not a fan of giving out for the sake of it – I try and make some sort of constructive suggestion. I’m hoping today’s suggestion will be particularly useful. It’s a simple one. Put every Census district of the country into ten different bands of the approximate cost of land and scale the property tax according to that. There is a wealth of information out there on Ireland’s property market, which the Government can use to find out the approximate “pecking order” of property values around the country. This would then be a very handy interim step towards the introduction of a full and fair land value tax, as discussed last week.

I can go one better than make the suggestion, I can actually do it! The map below puts each of the 3,400 Census districts in Ireland into one of ten land-value bands, from the top 10% around south Dublin and north Wicklow to the country’s cheapest homes in the Upper Shannon region. It’s based on research I’ve been doing in Oxford (a preliminary version of which I presented at the annual Spatial Economic Research Centre conference in London last month). The mapping is entirely thanks to Justin Gleeson of the National Institute for Regional & Spatial Analysis at NUI Maynooth, although the blame for its application for this purpose rests entirely with me. An underlying spreadsheet of the price per Census district is available for the Government, if it is interested. 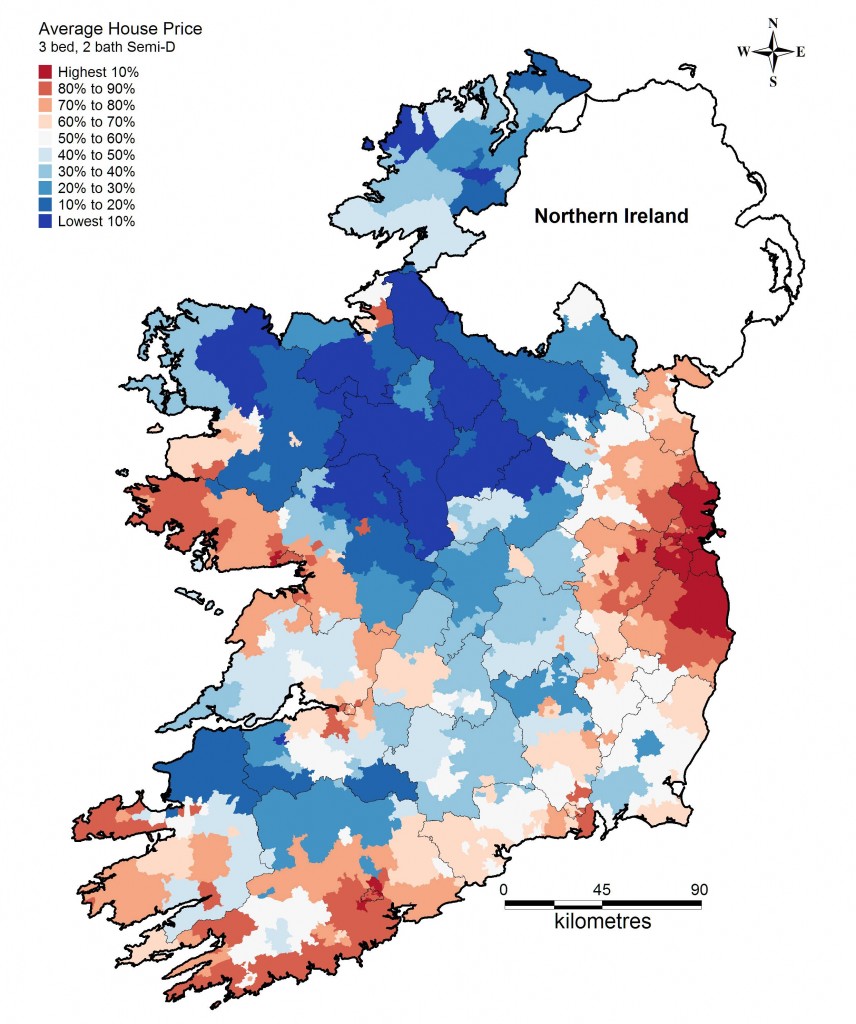 Suggested bands for an interim property charge in Ireland

For those who are curious, the map is calculated using the 200,000 advertisements of properties for sale on daft.ie from the start of 2009 to the end of 2010. The underlying analysis gives a like-for-like price per Census district, controlling for a range of property attributes, such as type, bedroom number and bathroom number, and – quite importantly – for the date the property was advertised. In that way, what you’re seeing is stripped of the time aspect, it’s even stripped of the level (so the fact that it is just asking prices doesn’t really matter) – it is just a ranking.  (link to full article)