PDF version of this submission

1.1 FEASTA is the Foundation for the Economics of Sustainability. It is based in Dublin and has an international membership. Our evidence here relates mainly to items 1, 3 and 7 in the EFRA Committee’s list of issues in its Call for Evidence.

2.1 There is a clear consensus that there is an urgent need to take effective action to limit the extent of climate change. It is also accepted that the earlier the world starts to reduce emissions of the greenhouse gases that are causing the change, the less drastic the cuts will need to be. A fast and effective solution is therefore required. The most effective way of cutting greenhouse (ie carbon) emissions is to cap them near to their current global level and then to reduce that level year by year. And the need for a fast way to secure international agreement on the use of a cap, on its size and on the measures to get it in place, suggests that a simple scheme is required.

2.2 The international climate negotiations under the UNFCCC banner are making very slow progress because no framework, no set of principles, has yet been agreed as the basis on which to proceed. Not even a temperature or atmospheric concentration target has yet been set. As a result, the Kyoto Protocol was negotiated on an ad hoc basis, with each industrialised nation, or group of nations, making an offer on the amount it would cut its emissions below their 1990 level.

2.3 Because much deeper cuts are required, the negotiations for the post-Kyoto period will have to be carried out in a very different manner. We suggest that the following steps should be taken:

2.4 This paper presents one such allocation system and shows both how it could relate to UK domestic policy and how UK policy could promote progress towards an international solution.

3. Systems of Allocation: Depth and Breadth

3.1 Internationally, the most-widely accepted framework emissions limitation and allocation is Contraction and Convergence. It is based on the principle of equal per capita entitlements. In other words, it has set out, to widespread approval, the principle that (after a possible transition period) the limited amount of emissions that the world has agreed to allow itself should be shared out on the basis of population. The main opposition to C&C has come from people who believe that countries which have become rich as a result of their historical emissions should get a smaller allocation when the division comes to be made. However, if it is accepted that the right to emit is not a national right, to be shared amongst countries on the basis of their populations, but an individual right, to be shared equally amongst the people of the world on the basis of their humanity, the historical basis for this opposition disappears. No individual is, after all, responsible for what his or her country did before they became adult. (More information on C&C can be found at the website of the Global Commons Institute, www.gci.org.uk).

Any effective plan to combat global climate change needs to be globally inclusive. There are two possible routes to this inclusivity, breadth-first and depth-first. These are illustrated in Figure 1. 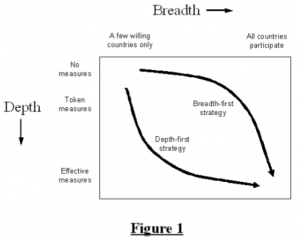 3.3 A breadth-first approach starts by securing global agreement on a series of measures, hoping later to add to them or to extend them, so as to increase their effectiveness. This is a typical UN approach and the Kyoto process is an example of its use. By contrast, a depth-first approach starts with a coalition of the willing, in the hope that more participants will join later on. This is an EU or WTO approach.

3.4 Instead of arguing about which approach is best, Feasta argues that we need both: in fact we need to explore the whole breadth-depth square, as humanity engages on a fast-track political learning process with the ultimate aim of reaching the bottom right-hand corner. Moreover, many competing schemes and programmes can work together (either by merging or transition from one to another) if a simple underlying framework underpins and unifies thinking. (During a war the simple objective of ‘winning’ unites a myriad of campaigns and initiatives by its simplicity).

4.1 We can picture current initiatives in the breadth-depth square, as in Fig. 2.

4.2 Kyoto went for breadth-first. It was negotiated and ratified by a large number of countries, but is widely seen as too weak to be effective in slowing or reducing global carbon emissions. It has been a valuable first step but as the struggle to find a way of including developing countries has shown, arguments about allocations of a fixed pie rapidly stall when participants can simply walk away.

4.3 In this arena, the simple solution is to share out emissions rights equally to all people on the planet. This is unarguable in the same sense that one-person-one-vote is unarguable as the basis for democracy. It amounts to granting entitlements to individuals on a per capita basis; these entitlements are percentages of the scientifically agreed global cap on carbon emissions. This principle is embodied in the policy of Contraction & Convergence mentioned above (which also envisages international trading in these entitlements and transitional arrangements from the current position).

4.4 By contrast, the EU ETS is headed in the depth-first direction, hammering out a system in a coalition of the willing (in this case the EU), with border protection (to guard against interim competitive disadvantage) and with incentives and mechanisms for other countries to join later on. The EU ETS has many detractors, and is widely seen as flawed, notably in the windfall allocation of permits (see the FEASTA submission to the All Party Parliamentary Group on Climate Change). However it is pioneering new ground, and provides the opportunity to build further, learning from early mistakes.

4.5 While the UK government can participate in the negotiation of such schemes, it has limited power to act other than domestically. On the domestic stage, however, the government can plan and implement effective domestic arrangements going beyond achieving Kyoto targets. ‘Effective’ here means going deeper, towards the bottom left-hand corner of the breadth-depth square.

4.6 Going deeper means that the stakes are raised and arguments get more heated as demand comes up against real constraints. Again, we need utter simplicity to cut through these arguments. The simplest system of all is Cap and Share.

5.2 Cap & Share is thus a form of domestic cap and trade. It is similar in this respect to Domestic Tradable Quotas and to Personal Carbon Allowances, being considered by the Secretary of State for the Environment. However, because the public sells its emissions entitlements to primary fossil-fuel extractors and importers, from that point on, the cost of the right to emit flows through the system and there is no need for the policing of a myriad of intermediate companies (as in the EU ETS), nor for any machinery of carbon cards or carbon accounts (with their cost and perceived civil liberties implications). From an individual consumer’s point of view, energy and energy-intensive goods are simply priced higher, but the cost of living implications of this are offset by the money obtained from selling the permits. Anyone whose lifestyle means that, directly or indirectly, they consume less fossil fuel than the UK average would be better off. Almost everyone on a low income would be in this category.

5.3 Cap & Share is transparently equitable and democratic – it is hard to argue against per capita allocation without being (and being seen to be) selfish and greedy. It resonates strongly with Contraction & Convergence at the global level: each individual’s allocation is exactly the same as their equal entitlement as a human being to the global cap under Contraction & Convergence. This happens because under Cap & Share the whole of each individual’s global share is allocated to that individual. Only then do individuals sell their emissions entitlements to the companies and organisations which operate on their behalf. Direct and indirect emissions are both covered automatically within the same scheme. Importantly, this brings home to people graphically their personal involvement in tacking a global problem: your global share, which is being debated in international discussions, is precisely what comes directly to you, as a certificate which you can hold in your hands. More details on Cap and Share can be found on the website (www.capandshare.org).

6.1 Cap and Share is a domestic policy instrument but one which is relevant to the global debate for the following reasons:

6.2 The purpose of this evidence is not to promote Cap & Share per se at the expense of other solutions, but to point out that it is so simple and so cheap that it could be implemented in the next parliamentary session – even if only as a transitional arrangement on the way to (say) Domestic Tradable Quotas or to an extended EU ETS in which, rather than permits being grandfathered to polluting industries or auctioned to them, entitlements to the whole of the EU’s emissions were distributed to the EU’s population via Cap & Share. Such a system, involving perhaps 30 countries, would be an excellent prototype for a worldwide system.

6.3 If the UK were to move in this direction it would give out strong signals of the country’s intentions and commitment, and furnish practical experience to underpin and kick-start serious negotiation towards effective EU-level and global solutions in the post-Kyoto world.